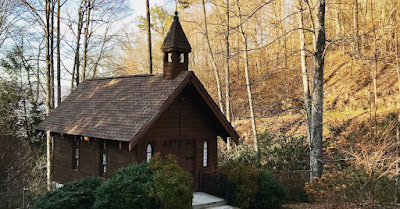 There is a great example of having a vision seen in the life of William Pitts as told by John Hudson Tiner in his book For Those Who Dare.

William was born in Orleans County, New York. As a young man, he taught school in rural Rock County, Wisconsin.

In 1857, Pitts boarded the stagecoach to visit his future bride who lived in Fredericksburg, Iowa. The stagecoach stopped in Bradford, Iowa, to change horses. The trip had left Pitts stiff and dusty. He exercised by walking to a grove of trees a short distance from the small village. The surroundings could not have been more pleasant: cool shade trees, lush grass, a soft breeze, and singing birds.

To Pitts’ eyes, the location seemed perfect for a little country church.

After a visit with the woman he loved, Pitts returned to his home in Wisconsin. The vision of a church in the pleasant grove refused to fade from his mind. Finally, Pitts described the persistent scene in song:

“There’s a church in the valley by the wildwood,

No lovelier spot in the dale;

No place is so dear to my childhood,

As the little brown church in the vale.”

With the vision captured in words, Pitts put aside the song and forgot about it.

About this time, John K. Nutting arrived in Bradford. He was a young, energetic minister who took over leadership of a struggling congregation. The good people of Bradford had no church building. They worshiped in an abandoned store with doors and windows missing. The new minister encouraged his congregation of pioneers to begin a building. They did the labor with their own hands and used donated materials. They quarried the stone for the foundation. They cut oak trees and dressed the lumber for the framing. They painted the church building with the color of paint donated to them by a local merchant—brown.

Unknown to church builders, Pitts, the songwriter, moved to Bradford to teach at the academy. When he revisited the wooded vale, what he saw could not have surprised him more. A little brown church now stood on the very spot that had inspired his song!

In 1864, the congregation completely finished the building. At the dedication ceremony, Pitts’ vocal class from the academy sang “The Little Brown Church in the Vale” in public for the first time. Later, Mr. Pitts sold the song to a Chicago publisher for $25.00. The money helped pay for medical studies. Pitts became a doctor and practiced in Fredericksburg, Iowa, for over forty years.

In 1916, church members collected money to reunite William Pitts and John Nutting. Both men were well into their eighties. The writer of the song and the builder of the church came together again after almost sixty years. Over time, the song became well known around the world.

What to do:
✞ Always be alert for ways to do the will of God.
✞ Walk not just with physical sight but also with spiritual sight.
✞ Ask God to give you a vision for His glory.