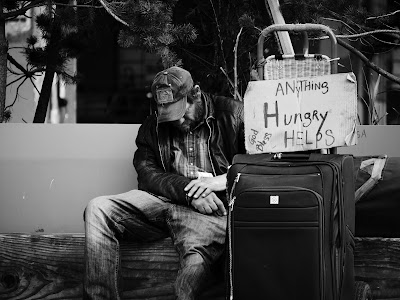 Bible : II Corinthians 12:1-10
Key Verse: Verse  9  – “And he said unto me, My grace   is sufficient for thee: for my strength is made perfect in weakness. Most gladly therefore will I rather glory in my infirmities, that the power of Christ may rest upon me.”
Key Words: My grace is sufficient


From my experience and study of God’s Word, it has become very apparent to me that hard times are no respecter of persons.  Every individual and every family will, at some point, experience the hard times of life.

Remember when Cain slew his brother, Abel?  They were the sons of Adam and Eve.  Can you imagine the agony they must have felt to have one son slain by another son– all because of the sin they had committed?  This must have been extremely hard on them.

Joseph also knew something about hard times.  He was hated by his brothers, sold into slavery, lied about by Potiphar’s wife, and cast into prison – sounds pretty trying to me!  And what about David?  He was pursued by King Saul, betrayed by Absalom, and fought off a deadly disease (Psalm 32).  Then there was Hezekiah who destroyed all the false gods. You know there were many in who were not happy about that.  Then there were the Assyrians, led by Sennacherib, who were determined to defeat and destroy Hezekiah.  What about Hezekiah’s illness, when he was told he was going to die?  Pretty hard times, don’t you think?

Now, one cannot talk about hard times without thinking of Job.  He lost all of his possessions; his sons all died; he was smitten with boils; and his friends berated him for being out of God’s will (which he wasn’t).  I would certainly call that hard times.

Without a doubt, the hardest time our family has ever faced was when Christy’s little Aussie boy, Callie and Cassia’s little bubba, Nana, Carissa, Cherie and Daniel’s little , and PawPaw’s Bud passed away.  A little time has passed since we buried our son, brother, grandson and nephew.  It was, and in many ways still is, a hard time; but like Paul and others, we have found that indeed God’s grace is sufficient.

What to do:
✞ Stay close to God.
✞ Pray often.
✞ Read God’s Word often.
✞ Invest your life in others going through hard times.