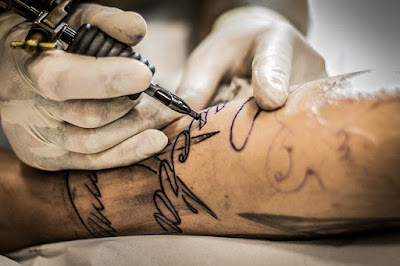 Key Verse: Verse 27–“ Pure religion and undefiled before God and the Father is this, To visit the fatherless and widows in their affliction, and to keep himself unspotted from the world.”

Key Words: keep himself unspotted from the world

We live in a world that has gone crazy over body piercings and tattoos. But Cathy Mickels gives us things to consider in an article she wrote entitled “A Slip Into Secularism.”

The following is only a part of her article.

Body piercing and tattooing are not new ideas. These practices go back thousands of years, even before the days of Leviticus 19:28. Likewise, in our own culture, piercing and tattooing have left their mark. However, until recently, the influence has never been considered positive. Instead, piercing and tattooing the body carried a negative stigma associated with rebellion or questionable character. In fact, seemingly innocent tattoos usually came with a story like, "One night me and my buddies were drunk and ..." Hence, in light of its growing popularity among Christian youth, should Christians view this as just another harmless fad? Or is it a symptom of something much deeper?

We can learn from the lessons of the Israelites. God repeatedly warned His people to "Be careful," and not follow the customs or ways of the pagans. Over and over again they did not heed these warnings given for their protection and preservation. Consequently, they were continually seduced and ensnared by their enemies, and "... went after the heathen that were round about them, concerning whom the LORD had charged them, that they should not do like them." (2 Kings 17:15)

Biblical "principles" were not just relegated to history. They are also for the Church today. Nonetheless, according to Charles Spurgeon, the carnal mind does not understand the principles of separation from the world. Yet, he warns, "When the town is on fire, our house cannot be too far from the flames. When the plague sweeps the land, we too are in danger. The further one is from the viper ... and ... from worldly conformity the better." But, where are we living today? Are we keeping our families further from the fires of the culture, or are we living right on the edge?

David Kuplian, vice-president of WorldNetDaily.com, says that "... throughout history certain societal behaviors contribute to its spiral downward and make a people ripe for rebellion against God." Describing today's "celebratory" piercing and tattooing of the body as one of the cultural indicators bearing "a striking resemblance to the ageless spirit of defiant paganism," Kuplian laments, " ... it's as though the rebellious spirit of reprobate, pagan civilizations of the past was tapped into by today's pop culture." ("The Marketing of Evil," Whistleblower, December 2003)

I’ve never known of a missionary, pastor, evangelist, or any one genuinely desiring to accomplish something for God who desired to have body piercings and tattoos. These things will and do hinder one’s ministry.

What to do:
✞ Keep yourself unspotted from the world.