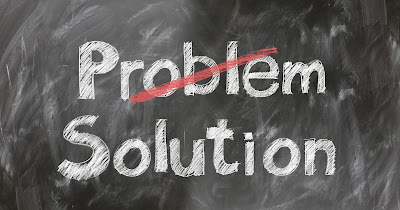 I would think the people of had problems; would you not agree?  How about you?  Have you ever been overwhelmed by a problem or problems?  Problems are certainly not a recent phenomenon.  Problems have existed ever since the Garden of Eden.

Jonah faced the problem of going to and he attempted to flee from the presence of the Lord.

Peter faced a problem which caused him to deny the Lord, not just once but three times.

Abraham faced a problem which caused him to have his wife, Sarai, lie on his behalf.

Hezekiah and were faced with the problem of having to go to war against the Assyrians, an enemy from a human perspective that they certainly could not defeat.

David faced a problem which brought him to his wit’s end.

So what are we to do when we are faced with problems in our lives?  There are three questions you must ask yourself and answer honestly to help you have victory over the problems you face.

First of all, is your problem yours because you’ve taken it from someone else?  Oftentimes we get involved with problems which are not really ours.  Absalom did that when he killed Amnon (See II Samuel 13).  Now, you would never take another person’s personal belongings, would you?  The same can be said for problems.  If you remember, Americans went to to assist the French army.  Well, after we arrived the French army promptly packed up and went home.  Now, the French no longer had a problem, had a problem.  So it is in our relationship with others...love people but don’t pick up their problems.

Thirdly, is your problem the result of God’s testing in your life?  Often I am asked what the difference is between Satan tempting us and God testing us.  Well, Satan always tempts us to go against the Word of God, while God tests us to see if we will obey the Word of God.  Another way of putting it is Satan tempts us to do wrong (sin) while God tests us to do right.  So is your problem brought on because you have failed to obey God, which produces chastening in your life?

While we will never be problem-free, our prayer is that these simple questions can help you understand why you are going through your problem and which hopefully will help in the resolution of your problem.

What to do:
✞ Problems should always remind us how much we truly need God.