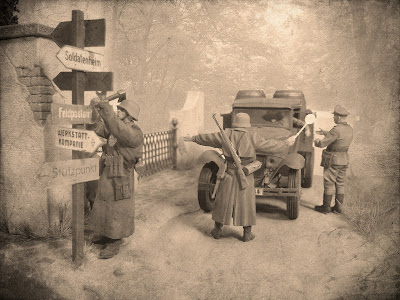 Key Verse: Verse 8 – “I will both lay me down in peace, and sleep: for thou, LORD, only makest me dwell in safety.”

Key Words: I will both lay me down in peace, and sleep: for thou, LORD, only makest me to dwell in safety.

This story has been told in a variety of ways, but this is the researched version that appeared in newspapers nationwide on December 25, 1994, from the Associated Press.

Eighty years ago, on the first Christmas Day of World War I, British and German troops put down their guns and celebrated peacefully together in the no-man’s land between the trenches.

The war, briefly, came to a halt.

In some places, festivities began when German troops lit candles on Christmas trees on their parapets so the British sentries a few hundred yards away could see them.

Elsewhere, the British acted first, starting bonfires and letting off rockets.  Pvt. Oswald Tilley of the London Rifle Brigade wrote to his parents:  “Just you think that while you were eating your turkey etc. I was out talking and shaking hands with the very men I had been trying to kill a few hours before!!  It was astounding.”

Both armies had received lots of comforts from home and felt generous and well disposed toward their enemies in the first winter of the war, before the vast battles of attrition began in 1915, eventually claiming 10 million lives.

All along the line that Christmas Day, soldiers found their enemies were much like them and began asking why they should be trying to kill each other.

The generals were shocked.  High Command diaries and statements express anxiety that if that sort of thing spread it could sap the troops’ will to fight.

The soldiers in khaki and gray sang carols to each other, exchanged gifts of tobacco, jam, sausage, chocolate and liquor, traded names and addresses and played soccer between the shell holes and barbed wire.  They even paid mutual trench visits.

This day is called “the most famous truce in military history” by the British television producer, Malcolm Brown, and researcher, Shirley Seaton, in their book Christmas Truce, published in 1984.

It is true Jesus did bring peace to the earth.  Luke 2:14, “Glory to God in the highest, and on earth peace, good will toward men.”

What to do:
✞ Remember only through Jesus Christ can men dwell together in peace.