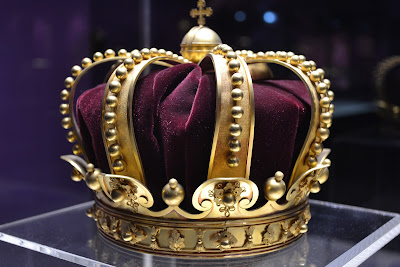 
To set the scene for this Christmas carol, let's first answer two questions: First, who was Wenceslas? And what is the feast of Stephen?

Wenceslas was the Duke of Bohemia during the early tenth century.  is now a region in the western .  Wenceslas converted to the Christian faith and encouraged ’s turn to Christianity.  St. Stephen’s day is a religious feast observed on December 26.  It commemorates the first Christian martyr.

So the curtain rises on King Wenceslas in , late in December sometime before 920 AD, looking out his window at the moonlit, snow-covered landscape.  He catches sight of a poor man, struggling through the deep snow and bitter cold, collecting firewood.  This begins an allegorical story.  Its characters and events symbolically express a deeper meaning.

Wenceslas represents God.  He leaves his warm home to provide for the poor man’s needs, just as God came to earth as Jesus Christ to seek and to save the lost.  The page, or servant, who follows Wenceslas, symbolizes a believer in Christ.  As he follows his Lord in the wintry, cold world, he begins to falter, “Fails my heart, I know not how;” he cries, “I can go no longer.”

“Mark my footsteps,” says the king, “tread thou in them boldly.”   The servant does so and finds he can more easily follow.

“Good King Wenceslas” was written and published in 1853 by the Englishman J. M. Neale, perhaps to encourage people to follow in the charitable footsteps of the Master where, “Ye who now will bless the poor, shall yourselves find blessing.”

Good King Wenceslas looked out
On the Feast of Stephen
When the snow lay round about
Deep and crisp and even.
Brightly shone the moon that night
Though the frost was cruel,
When a poor man came in sight
Gathering winter fuel.

What to do:
✞ This Christmas season let others know their greatest need is Jesus.