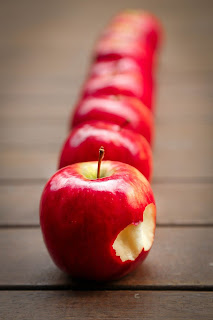 Hezekiah as king accomplished a number of things.  He was king when God defeated the Assyrian army.  He was king when God gave him fifteen years of additional life; but in our text Hezekiah, the king, had led the nation back into temple worship.  The people had been worshipping false gods, but through Hezekiah’s dedication to God the altars of the false gods were destroyed and worship of Jehovah was returned.  As a result of this change, Hezekiah had the priests cleanse themselves and had the people give an offering of thanksgiving to God.

Our giving, as well, is a reflection of our gratitude toward God.

The following story sadly illustrates many believers’ gratitude toward the blessings of God.

“Once upon a time there was a man who had nothing, and God gave him ten apples.

He gave him the first three apples to eat.

He gave him the second three apples to trade for shelter from the sun and rain.

He gave him the third three apples to trade for clothing to wear.

He gave him the last apple to give back to God in order that he could show his gratitude for the other nine.

He traded the second three apples for shelter from the sun and rain.

He traded the third three apples for clothing to wear.

Then he looked at the tenth apple.  It seemed bigger and juicier than the rest.  He knew that God had given him the tenth apple so that he might demonstrate his love and gratitude by returning it to God.  But it was so much bigger and juicier than the rest; and he began to reason within himself, ‘God has all the other apples in the orchard, he’ll not miss this one.’  So the man ate the apple and gave God the core.”

Now, the moral of this story is this: It is not about the apple – it is about you and me and our attitude of gratitude.  Do you demonstrate thankfulness to God through your giving?

What to do:
✞ Lay aside a minimum of ten percent of everything you receive and give it to God (through your local church).
✞ Teach this principle to your children.