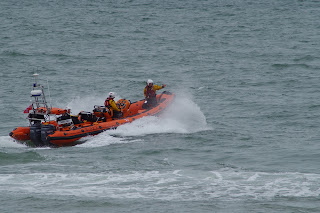 
There were ten lepers healed, but only one was thankful.  Thanklessness for what God has done for us is, I am afraid, quite common, because we fail to realize that without the Lord we would all be “sunk.”

The Theresa Boyle, a trawler from , had been sunk by a Nazi bomber in the .  The crew of ten was able to get away in their lifeboat which was only a small boat.  For hours they rowed about hoping someone would see them.

This happened in February.  It was terribly cold, and they did not have much food with them.  Forty hours went past and no one had sighted their boat.  As the weary hours dragged on, one after another of the men became exhausted and could not help with the rowing.

Ten more hours went past, which seemed to them much longer; and hope was beginning to fail when, in the distance, an airplane was seen.  Oh, how their hearts beat!  Was it a friend or a foe?  Soon they recognized it to be a friendly plane.  Would they be seen?

The keen eye of the pilot on patrol did not miss them, although their boat was being buffeted by the heavy seas.  By this time eight of the men were lying on the floorboard, too weak to row, but just able to wave anxiously at the pilot.

The plane flew low.  The men realized they had been seen, and off it went in search of help.  It found two mine sweepers, some fifteen miles away, and asked them by lamp signals to follow it.  By firing colored lights the pilot guided the mine sweeper to the open boat.  It circled round until the men, the entire crew of the sunken trawler, were taken on board – SAVED!

Then it flew off.  After going two miles, a signal lamp from one rescue ship recalled the plane.

“Anything wrong?” signaled the pilot.

“No,” the reply flickered.  “These chaps we picked up just wanted to say Thank You!”  With this message, off flew the plane to carry on its duty of patrol.

Has this story struck a chord with you?  Have you ever thanked the Lord Jesus for what He has done?

What to do:
✞ Thank the Lord today for your salvation.
✞ Tell others what Jesus has done for you.
✞ As a family, have at least one “praise day” a week, where all the family praises the Lord – no complaints, criticisms, or gripes allowed!