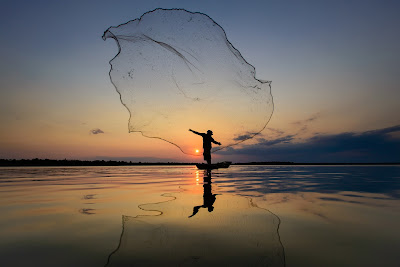 Key Verse: Verse 19 – “And he saith unto them, Follow me, and I will make you fishers of men.”

Key Words: Follow me, and I will make you fishers of men

There are several things I find interesting in regard to Jesus’ calling of Peter and John.

I’ve heard several messages talking about using the right bait and the right gear; but Peter and John didn’t use any of that, they cast nets. Our net is the Word of God. We cast (toss, throw) God’s Word out wherever we go.

But another key to success is following Jesus. The word follow carries the idea of to pursue, to obey. So in essence Jesus was saying, “Pursue after Me, obey what I teach you and you will become a successful fisher of men.”

How important are souls to you?

Dean Hart once sat at the same table with a Roman Catholic priest. During the conversation, Hart said, “Sir, if I believed as you do that I could pray people out of the suffering of hell and purgatory, I would spend all of my time on my knees getting them out.” The priest answered, “And if I believed as you do, that once a man is in hell for eternity, I would wear out shoe leather urging, constraining, compelling men and women to get saved now!”

What to do:
✞ The key to being an efficient witness is to follow Jesus.