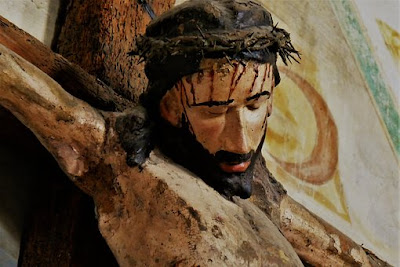 Bible Reading: Matthew 27:57-66
Key Verse: Verse 63 – “Saying, Sir, we remember that that deceiver said, while he was yet alive, After three days I will rise again.”

That’s like the pot calling the kettle black. Here are the real deceivers calling Jesus a deceiver. They thought Jesus was a fake and that He would have the disciples steal his body and claim that He had risen from the dead. Boy, are they in for a shock when they find all of their efforts are vain. God rolled the stone away. The keepers of the sepulcher were frozen in sleep and Jesus did just as He said He would do: rise again the third day!

A young boy was gazing intently at the picture in the art store window. The art store was displaying a notable picture of the crucifixion of Christ. An older man approached, stopped and looked. The boy seeing his interest said, “That’s Jesus.” The man made no reply so the lad continued, “Those are the Roman soldiers.” After a moment, the boy said, “They killed Him.”

“Where did you learn that?” the man asked.

“In the mission Sunday School,” came the rapid reply.

The man turned and walked thoughtfully away. He had not gone far when he heard the young boy calling out to him. The boy cried out again and again. Finally the man stopped. “I wanted to tell you that He rose again,” the young boy said.

The resurrection is at the very core of our salvation. Romans 10:9, “That if thou shalt confess with thy mouth the Lord Jesus, and shalt believe in thine heart that God hath raised him from the dead, thou shalt be saved.”

The resurrection was no deception and Jesus was no fake!!

You ask me how I know He lives. He lives within my heart.

What to do:
✞ Believe on the Lord Jesus Christ and thou shalt be saved!!