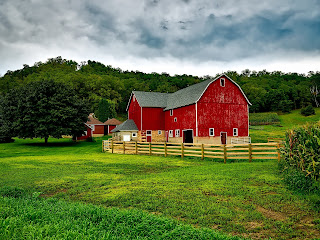 Key Verse: Verse 5 – “But ye say, Whosoever shall say to his father or his mother, It is a gift, by whatsoever thou mightest be profited by me;”

Key Words: It is a gift

The religious leaders in Jerusalem were constantly looking for fault in the disciples of Christ. One of the so-called faults was that the disciples didn’t wash their hands before eating.

Jesus did what he usually did, He turned their fault-finding back on them. He told them they transgressed the law by failing to honor their father and mother. When their parents had a need they would tell them they didn’t have anything to give because they had given a gift on the altar to God. (See Mark 7:11-14.) In essence they had lied to their parents and used their religion to justify it.

A young man one day was on his way to visit a friend named John who lived on a farm. He entered the farm and began to meander up the road that led to his friend’s home. He had to pass by a barn and as he got near to it, he stopped, perplexed. He saw something that both mesmerized and stupefied him. On the barn were twenty targets. In the middle of each target was a bull’s-eye, and in the middle of each bull’s-eye was a hole. Someone had used the barn as target practice and whoever it was, was a crack shot. There were no other holes on the barn except the holes in the bull’s-eyes, centered in the targets. He couldn’t believe it. He started back up the road to the house. When he met up with John at the house, he said, ‘‘Before we begin our day together, I’ve just got to ask you, who in the world did the shooting on the barn?’’ John said, ‘‘Well I did.’’ The man looked surprised and said, “Wait a minute! There are twenty targets, with twenty bulls-eyes, with twenty holes in each bull’s-eye. You mean to tell me you did that?’’ John said, ‘‘Yep, I made every shot.’’ ‘‘Where in the world…how in the world did you learn to shoot like that?’’ John said, ‘‘It’s simple, I shot first, then I drew a picture of the target around the hole.’’

A lot of us are just like John. Maybe we know the right words to say; maybe we know how to dress up for church on Easter. But it’s not so much that we’ve hit the bull’s-eye, we’ve just learned to paint well. It’s possible to go through the motions and not live a life on target.

What to do:
✞ Be real. It’s one of the hardest things you will ever do.