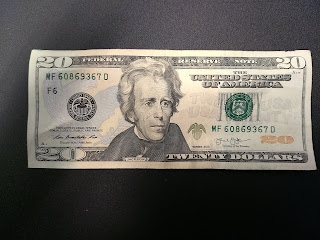 Key Words: no more worthy to be called thy son

Have you ever felt unworthy? Think about the following.

Peter denied the Lord – not once, but three times! Why, he even physically attacked a man, cutting off his ear. David committed adultery and had one of his finest soldiers put into the heat of the battle so he would die. Abraham disobeyed God and instructed his wife to lie for his own good. Jacob deceived his father, Isaac, and took his brother’s birthright through deception. Thomas doubted Jesus and questioned Jesus’ command to go to Jerusalem.

A well known speaker started his message by holding up a $20 bill. He asked the congregation, "Who would like this $20 bill?" Hands went up everywhere.

He then asked, "Who still wants it?" Again hands went up all over the auditorium.

"Well," he replied, "What if I do this?" And he dropped it on the ground and started to grind it into the floor with his shoe.

He picked it up, now all crumpled and dirty. "Now who wants the money?" Still the hands went up everywhere.

He then looked at the congregation and said, "We have all learned a very valuable lesson. No matter what I do to the money, you still want it, because in spite of the fact it is crumpled and dirty, it did not decrease in value. It is still worth $20.”

So it is with our lives. Many times in our lives, we fail often, we are crumpled by the cares of the world, dirtied by our lust and sinful nature; but we are still valuable to God. God loves us and the worth of our lives is not in what we do, but in whose we are.”

Dear friend, you, as a believer, are the child of God. You may have fallen and failed but I encourage you to get up because you are worth much to God.

✞ Evaluate your worth, not based upon what you do for God but on what He has and is to you.