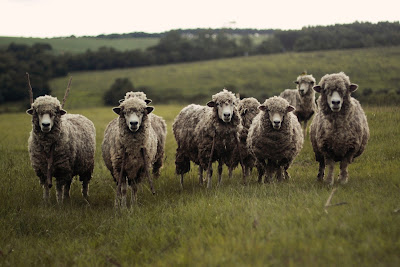 Key Verse: Verse 18 – “For thus saith the LORD that created the heavens; God himself that formed the earth and made it; he hath established it, he created it not in vain, he formed it to be inhabited: I am the LORD; and there is none else.”

We live in a day of uncertainties. The economy is volatile. As a result, many jobs are insecure. Our safety with terrorism being what it is causes some uncertainty. Many churches are making changes, and not for the better. Violence in our schools has caused some to cry out for more controls. Life is filled with uncertainties.

In a world of uncertainty many of us are going through some hard times. But isn’t it reassuring to know that God and His Word are certain? We can count on God’s “thus saith the Lord.”

In his book Light for Anxious Souls, George Cutting told about a farmer who lacked the assurance of salvation. He foolishly prayed that as an evidence of his acceptance, the Lord would cause 10 sheep of his flock -- and only 10 -- to gather in a certain shed out in the pasture.

Later that day, when the farmer anxiously approached the shed, he was relieved to find exactly 10 sheep. That gave him a temporary sense of peace. Doubt returned with the shocking thought that it may have been just a coincidence. So he asked the Lord that 10 different sheep might gather in an opposite corner of the pasture. And they did!

When the farmer was asked, “Did this give you assurance?” he said, “No, nothing gave me certainty until I got the sure Word of God for it.”

Cutting concluded, “He was all in a fog of uncertainty until he planted his foot firmly on the ‘Thus saith the Lord.’”

And so it is with us all. Our only certainty of life is in “thus saith the Lord.” Now, you can count on that!!

✞ Put your trust in God’s Word, not in society’s promises.