Daily Devotion: THE MEANING OF HONOR 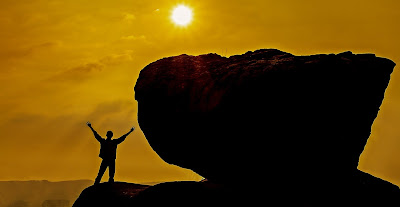 
The word honor comes from the Greek word meaning weighty, valuable. The idea is that a person of honor carries a lot of weight (influence) and that makes them valuable when they use their influence for God.

When I lived in Pinson, I was working in our yard tilling up some ground. I came across a good size rock. Now, if you know anything about Pinson, Alabama, you know that Pinson sits on top of a rock. There are rocks everywhere. But this rock was nothing compared to the boulder I was about to meet. The first rock was large and somewhat heavy but I did manage to toss it aside – but not the boulder, it was huge. It took me several hours to dig it up, but finally I succeeded. At least that’s what I thought. I tried to pick it up which didn’t work; pull it, again no success; and my last effort was to push it. I met with defeat each time. As I was thinking about the word honor, that which is valuable, weighty, I thought about these two rocks. One I was able to toss aside while the other – well let’s just say it made a great impression on me. That’s what Godly honor is – it leaves a great impression on others. So let me ask about you: what kind of impression are you leaving on others?

✞ Be honorable, it’s how you influence others.