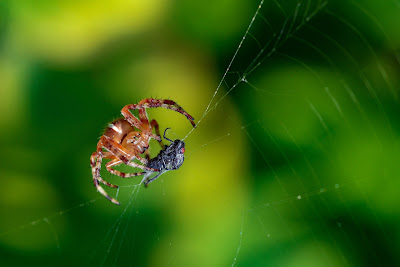 Bible Reading: Genesis 3:1-19
Key Verse: Verse 6 – “And when the woman saw that the tree was good for food, and that it was pleasant to the eyes, and a tree to be desired to make one wise, she took of the fruit thereof, and did eat, and gave also unto her husband with her; and he did eat.”

Key Words: and he did eat

If you live as a Christian then you’ll never fall into the trap of peer pressure.

I once read about a spider that built a beautiful web in an old house. He kept it clean and shiny so that flies would patronize it. The minute he got a “customer” he would clean up after him so the other flies would not get suspicious.

But presently he saw on the floor below a large crowd of flies dancing around on a piece of brown paper. He was delighted! He was not afraid if lots of flies were doing it, so he came in for a landing.

Just before he landed, a bee zoomed by, saying, “Don’t land there, stupid! That’s flypaper!” But the fairly intelligent fly shouted back, “Don’t be silly. Those flies are dancing. There’s a big crowd there. Everybody’s doing it. That many flies can’t be wrong.” Well, you know what happened. He died on the spot.

Some of us want to be with the crowd so badly that we end up in a mess. What does it profit a fly (or a person) if he escapes the web only to end up in the glue?

As a Christian, we should not long for things simply because others do, but rather we should long for the things of God.

✞ You are free to do as you want, but you are not free to choose the consequences of your actions.