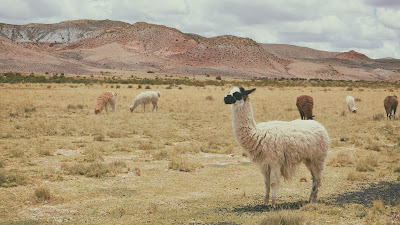 Key Verse: Verse 7 – “Submit yourselves therefore to God. Resist the devil, and he will flee from you.”

Reports the DENVER POST: “Like many sheep ranchers in the West, Lexy Fowler has tried just about everything to stop crafty coyotes from killing her sheep. She has used odor sprays, electric fences, and ‘scare-coyotes.’ She has slept with her lambs during the summer and has placed battery-operated radios near them. She has corralled them at night, herded them at day. But the southern Montana rancher has lost scores of lambs—fifty last year alone.

“Then she discovered the llama—the aggressive, funny-looking, afraid-of-nothing llama...’Llamas don’t appear to be afraid of anything,’ she said. ‘When they see something, they put their head up and walk straight toward it. That is aggressive behavior as far as the coyote is concerned, and they won’t have anything to do with that... Coyotes are opportunists, and llamas take that opportunity away.’“

Apparently llamas know the truth of what James writes: “Resist the Devil, and he will flee from you” (4:7). The moment we sense his attack through temptation is the moment we should face it and deal with it for what it is.

When we fail to submit and resist, we will face the self-induced trial of falling into temptation!!

✞ Submit to God; resist the devil; watch him flee.