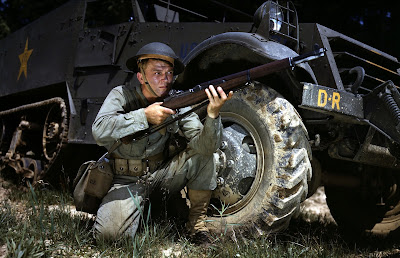 It was 1944, and Bert Frizen was an infantryman on the front line in Europe. American forces had advanced in the face of intermittent shelling and small-arms fire throughout the morning hours, but now all was quiet. His patrol reached the edge of a wooded area with an open field before them. Unknown to the Americans, a battery of Germans waited in a hedgerow about two hundred yards across the field.

Bert was one of two scouts who moved out into the clearing. Once he was halfway across the field, the remainder of his battalion followed. Suddenly the Germans opened fire, and machine gun fire ripped into both of Bert's legs. The American battalion withdrew into the woods for protection, while a rapid exchange of fire continued.

Bert lay helplessly in a small stream as shots volleyed overhead. There seemed to be no way out. To make matters worse, he now noticed that a German soldier was crawling toward him. Death appeared imminent so he closed his eyes and waited.

To Bert's surprise, a considerable period passed without the expected attack, so he ventured opening his eyes again. He was startled to see the German kneeling at his side, smiling. He then noticed that the shooting had stopped. Troops from both sides of the battlefield watched anxiously. Without any verbal exchange, this mysterious German reached down to lift Bert in his arms and proceeded to carry him to the safety of Bert's comrades.

Having accomplished his self-appointed mission, and still without speaking a word, the German soldier turned and walked back across the field to his own troop. No one dared break the silence of this sacred moment. Moments later the cease-fire ended, but not before all those present had witnessed the power of self-abdicating love, how one man risked everything for his enemy.

Bert’s life was saved through the agape love of a man whom he considered his enemy. This courageous act pictures what Jesus did for us and how we are to treat others, especially those who are unlovely toward us.

Thought: You have a good reason to love your enemies. They are the first ones to find your faults.