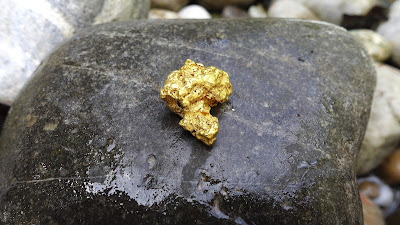 
A miser, who never stopped worrying about the safety of his possessions, sold all his property and converted it into a huge lump of gold. This he buried in a hole in the ground near his garden wall, and every morning he went to visit it and gloat over the size of it.

The miser’s strange behavior aroused the curiosity of the town thief. Spying on the rich man from some bushes, the thief saw him place the lump of gold back in the hole and cover it up. As soon as the miser’s back was turned, the thief went to the spot, dug up the gold, and took it away.

The next morning, when the miser went to gloat over his treasure, he found nothing but an empty hole. He wept and tore his hair, and so loud were his lamentations that a neighbor came running to see what was the trouble. As soon as he had learned the cause of it, he said comfortingly, “You are foolish to distress yourself over something that was buried in the earth. Take a stone and put it in the hole, and think that it is your lump of gold. You were never meant to use it anyway. Therefore, it will do you just as much good to fondle a lump of granite as a lump of gold.”

This fable by Aesop has a very significant moral for every Christian: “The true value of money is not in its possession but in its use.”

Thought: The real measure of our wealth is how much we’d be worth if we lost all of our money.