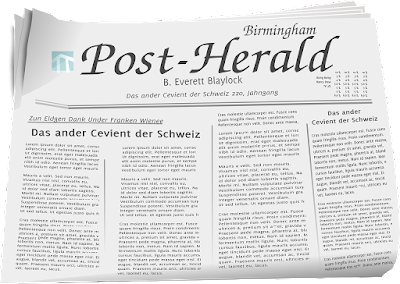 Bible Reading: Acts 6
Key Verse: Verse 3 – “Wherefore, brethren, look ye out among you seven men of honest report, full of the Holy Ghost and wisdom, whom we may appoint over this business.”
Key Words: of honest report


Thought: Live your life so that your autograph will be wanted instead of your fingerprints.

Devotional writer Henry G. Bosch once wrote in Our Daily Bread that when he was a boy he would often work with his father during the summer months.   Leaving home each morning, they would stop at a particular store for a newspaper, which they read at coffee break.  One day, arriving at work, Henry's dad discovered that he had taken two papers by mistake because they were so thin.   After a moment's thought, he decided to return to the store immediately to pay for the extra paper.   "I don't want the owner, who isn't a Christian, to think I'm dishonest," said Mr. Bosch.

About a week later, some expensive items were shoplifted from the same store.   The police calculated that at the time of the robbery only two men had been shopping in the store – Mr. Bosch and another man.   "I know John is honest," said the storekeeper.  "Just last week he came all the way back here to return a newspaper he'd taken by mistake."  The police questioned the other man instead and, in so doing, apprehended the culprit who made a full confession.

"Father's honesty and Christian character…not only made a deep impression on the storekeeper," Henry later wrote, "but his actions also left an indelible mark upon my young and pliable mind."

✞ Be honest; it will come back to “save” you someday.