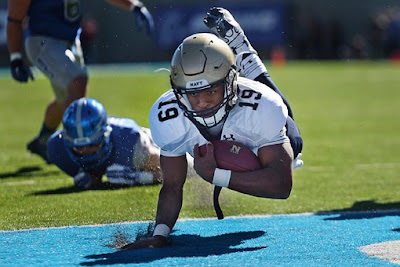 Key Verse: verse 10 –“And the LORD said unto Joshua, Get thee up; wherefore liest thou thus upon thy face?”

Key Words: Get thee up

Israel had been defeated by lowly Ai. Now the Lord admonishes them to get up and deal with their defeat.

Now, all of us have faced defeat in our lives, but the question is will we get up and keep going.

It was a dark and dreary night in 1916, a day well-suited to the most brutally devastating bout in all of football history. One look at the two teams showed trouble ahead. On the Georgia Tech side were semi-human monsters, gorilla-like behemoths trained by John Heisman, the man football’s highest award was later named after. Heisman was a fanatic. He would not let his Yellow Jackets use soap or water because he considered them debilitating; nor could they eat pastry, pork, veal, hot bread, nuts, apples, or coffee. His reason? “They don’t agree with me,” he growled, “so they’d better not agree with you.”

The Yellow Jackets, with eight All-Southern players, were intent on building their reputation. They lured lowly Cumberland to the game with a $500 guarantee. The Cumberland team had several players who had never played and left the team in the hands of the team manager. Even the trip to Atlanta had been a disaster: Cumberland arrived with only sixteen players. Three were lost at a rest stop in Nashville. The game began. Georgia scored sixty-three points in the first quarter, averaging touchdowns at one-minute-and-twenty-second intervals. Even after such a lopsided start, the rest of the game was filled with tension and drama! No one questioned who would win, of course. But could Cumberland players be convinced to finish the game? The manager, George Allen, paced the sidelines, exhorting the team to “hang in there for Cumberland’s $500.” They did, and with it collected the honor of the worst loss in football history: 222-0.

Cumberland also left posterity one of its most memorable football plays. A Cumberland kickoff returner fumbled, probably from sheer weariness. He yelled to a teammate, “Pick up the ball!” Replied his teammate, “Pick it up yourself! You dropped it!”

So when you face defeat, don’t just lay there – pick up the ball and run it!!

What to do:
✞ When you are defeated, keep going because at this point you have nothing else to lose.