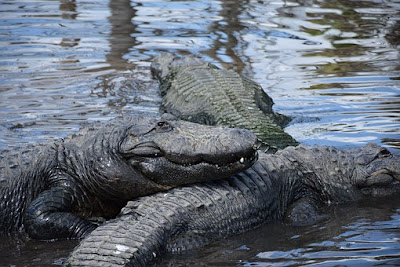 Key Words: Neither be afraid of them

Israel, some years before, had refused to take the Promised Land as God had told them to do. Now they are murmuring and complaining about their wilderness wanderings. So God reviews for them why they are in the plight in which they now find themselves. Their fear of the nations that occupied the Promised Land had prevailed over them; and without a shot ever being fired or a sword ever being drawn, Israel surrendered, not to other nations but to fear.

Most of us would surrender to fear if it were not for the urging of others.

“A very wealthy man bought a huge ranch in Arizona and he invited some of his closest associates in to see it. After touring some of the 1,500 acres of mountains and rivers and grasslands, he took everybody to the house. The house was as spectacular as the scenery, and out back was the largest swimming pool you have ever seen. However, this gigantic swimming pool was filled with alligators. The rich owner explained this way: ‘I value courage more than anything else. Courage is what made me a billionaire. In fact, I think that courage is such a powerful virtue that if anybody is courageous enough to jump in that pool, swim through those alligators and make it to the other side, I’ll give them anything they want, anything – my house, my land, my money.’ Of course, everybody laughed at the absurd challenge and proceeded to follow the owner into the house for lunch...when suddenly they heard a splash. Turning around they saw this guy swimming for his life across the pool, thrashing at the water, as the alligators swarmed after him. After several death-defying seconds, the man made it, unharmed to the other side. Our rich host was absolutely amazed, but he stuck to his promise. He said, ‘You are indeed a man of courage and I will stick to my word. What do you want? You can have anything – my house, my land, my money – just tell me what you want and it is yours.’ The swimmer, breathing heavily, looked up at the host and said, ‘I just want to know one thing – who pushed me in that pool?’”

What to do:
✞ Remember that fear can be a great motivator.