Daily Devotion: The Bible Made A Difference 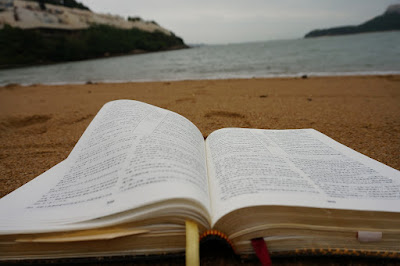 Key Verse: Verse 13 – “Then they cried unto the LORD in their trouble, and he saved them out of their distresses.”

Key Words: and he saved them

When it comes down to it, there is really only one book in our library that makes a difference in the lives of men and women, boys and girls. This book is the Bible.

Alexander Duff, missionary to India, got off to a rough start. He was young, only twenty-three. He was also bright and innovative. When traveling to India, his ship, the Lady Holland, was within just a few miles of India. It was ten o’clock at night, Duff was half-undressed when a shock and shudder ran through the vessel. He rushed to the deck when the Captain met him with terrifying words, “Oh, she’s gone – she’s gone!” The ship had split apart, but a portion clung precariously to a reef. Through the night, the passengers huddled in terror in the surviving portion of the ship, expecting any moment to be swept away. To their amazement though, a rescue ship appeared and they were saved; but all their possessions were lost, including Duff’s entire library of eight hundred volumes.

Later, standing on shore and looking sadly toward the reef, Duff saw a small package bobbing atop the water. He watched and waited as it floated close enough for him to wade out and retrieve the package. Amazingly, it was his Bible. Of all the precious books, it alone had survived. His heart soared, for he knew this book alone was the one book that could make a difference in the lives of those to whom he had come to minister.

He quickly assembled his fellow survivors and read Psalm 107. Duff began to reach thousands for Christ and trained a generation of leaders for the nation of India and for the cause of Christ. But he could not have done it without the Bible. It was, indeed, the book that made a difference.