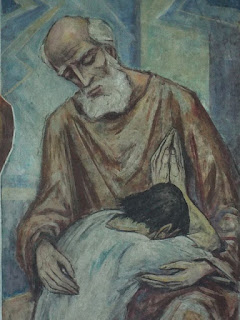 Key Verse: Verse 32 – “It was meet that we should make merry, and be glad: for this thy brother was dead, and is alive again; and was lost, and is found.”

Key Words: for this thy brother was dead, and is alive again

“You're worried about permissiveness—about the way the preaching of grace seems to say it's okay to do all kinds of terrible things as long as you just walk in afterward and take the free gift of God's forgiveness.

“While you and I may be worried about seeming to give permission, Jesus apparently wasn't. He wasn't afraid of giving the prodigal son a kiss instead of a lecture, a party instead of probation; and he proved that by bringing in the elder brother at the end of the story and having him raise pretty much the same objections you do. He's angry about the party. He complains that his father is lowering standards and ignoring virtue—that music, dancing, and a fattened calf are, in effect, just so many permissions to break the law. And to that, Jesus has the father say only one thing: Cut that out! We're not playing good boys and bad boys any more. Your brother was dead and he's alive again. The name of the game from now on is resurrection, not bookkeeping.’"

What to do:
✞ Be more concerned for their souls than being concerned about what others are doing.