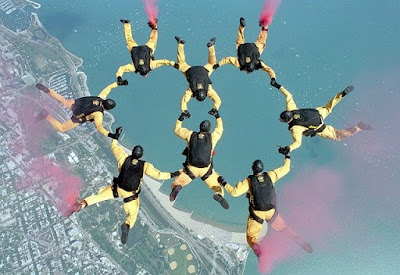 Key Verse: Verse 10 - “Then came the word of the LORD unto Samuel, saying,”

Key Words: Then came the word of the LORD unto Samuel, saying

There is much that could be said about Samuel. His name means heard of God. He was given to serve God at an early age, instructed to hear God in his youth, listen to God in his adult years. He anointed two kings: Saul and David.

Unger in his Bible dictionary says that Samuel stands out in two areas: first in his piety, and secondly, in his patriotism.

Samuel is a picture of a life of faith from his birth to his death. No wonder he is mentioned in God’s Hall of Faith!

We as well can make it through this life by faith, but our faith must be in God.

In April 1988 the evening news reported on a photographer who was a skydiver. He had jumped from a plane along with numerous other skydivers and filmed the group as they fell and opened their parachutes. On the film shown on the telecast, as the final skydiver opened his chute, the picture went berserk. The announcer reported that the cameraman had fallen to his death, having jumped out of the plane without his parachute. It wasn’t until he reached for the absent ripcord that he realized he was freefalling without a parachute. Until that point, the jump probably seemed exciting and fun. But tragically, he had acted with thoughtless haste and deadly foolishness. Nothing could save him, for his faith was in a parachute never buckled on. Faith in anything but an all-sufficient God can be just as tragic spiritually. Only with faith in Jesus Christ dare we step into the dangerous excitement of life.

I trust today and everyday, you’ll live your life by faith in God.

What to do:
✞ Understanding is the reward of faith. Therefore, we should not seek to understand so we can believe, but we should believe, then we will understand.