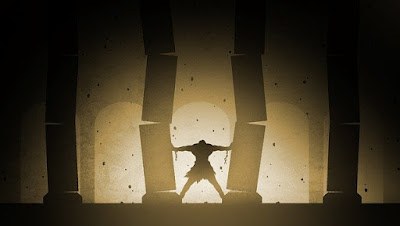 Key Verse: Judges 16:30 - "And Samson said, Let me die with the Philistines. And he bowed himself with all his might; and the house fell upon the lords, and upon all the people that were therein. So the dead which he slew at his death were more than they which he slew in his life. “

Key Words: Let me die with the Philistines

Everyone knows the story of Samson, his astounding strength, his amazing riddles, and how he was amused with women. It was his relationship with the harlot Delilah which eventually brought him down. With all of Samson’s faults, he is still listed in God’s Hall of Faith. He was a mighty judge and a furious warrior. But it wasn’t just Samson’s life he was known for, it was also his death. Samson had the faith to die right. Samson died right because he returned to God from a life of sin.

An Arab awakened in the middle of the night and was very hungry. He lit a candle and began to eat the dates beside his bed. He took one, held it up to the light, saw a worm was in it, and threw it out of his tent. He took a second, held it up to the light, saw another worm, and threw the date away. The same thing happened for a third time. Finally, he blew out the candle, grabbed the dates and stuffed them into his mouth, not wanting to face reality.

The moral of the story is: truth is truth even if you are not willing to face it. So it is with death, we are all going to die if God tarries his second coming. The question is, will you die right?

What to do:
✞ As a believer, if you’ll live right, you’re assured of dying right.