Daily Devotion: Led By the Spirit 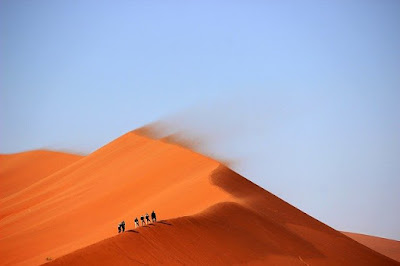 Key Verse: Verse 1 – “Then was Jesus led up of the Spirit into the wilderness to be tempted of the devil.”

Key Words: led up of the Spirit

There is an old saying that goes, “Make sure you know who you are following before you follow them.”

The same can be said in regard to the spiritual things. Always make sure you know that you are being led by the Spirit and not by your own selfish desires or the pull of the world. One way you can know if it is the Spirit leading you is the Spirit leads upward, but the flesh and the world lead downward. Matthew 4:1 says that Jesus was “led up of the Spirit.”

The flesh and the world will lead you directly into destruction. The following incident related by Sir Samuel Baker illustrates the point well:

“Many years ago, when the Egyptian troops first conquered Nubia, a regiment was destroyed by thirst in crossing the Nubian desert. The men, being upon a limited allowance of water, suffered from extreme thirst; and, deceived by the appearance of a mirage that exactly resembled a beautiful lake, they insisted on being taken to its banks by the Arab guide. It was in vain that the guide assured them that the lake was unreal, and he refused to lose the precious time by wandering from his course. Words led to blows; and he was killed by the soldiers, whose lives depended upon his guidance. The whole regiment turned from the track and rushed toward the welcome waters. Thirsty and faint, over the burning sands they hurried; heavier and heavier their footsteps became; hotter and hotter their breath as deeper they pushed into the desert, farther and farther from the lost track, where the pilot lay in his blood; and still the mocking spirits of the desert, the afreets (evil spirits) of the mirage, led them on. The lake, glistening in the sunshine, tempted them to bathe in its cool waters, close to their eyes, but never at their lips. At length the delusion vanished – the fatal lake had turned to burning sand! Raging thirst and horrible despair! The pathless desert and the murdered guide! Lost! Lost! All lost! Not a man ever left the desert; but they were subsequently discovered, parched and withered corpses, by the Arabs sent upon the search.”

No sin lures unwary souls from the path of righteousness. The Holy Spirit warns and entreats them. They grieve Him and drive Him away; and when it is too late, they mourn their folly.

What to do:
✞ Make sure you are following the Holy Spirit. Again, the Spirit leads upward, not downward.
✞ Be a loyal follower.
✞ Be a faithful follower. These things pay spiritual dividends.