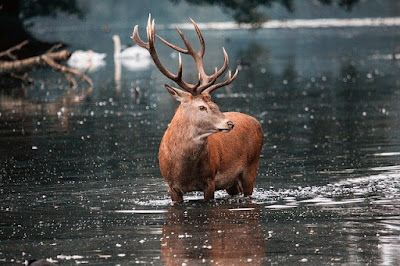 Key Verse: Verse 4 - “Now there are diversities of gifts, but the same Spirit.”

Key Words: diversities of gifts, but the same Spirit

The book of I Corinthians is not a book of commendation, but a book of condemnation, a book of correction. Paul is writing the believers at the church of Corinth because they all wanted the same gifts. We are told in I Corinthians 12:29-30, “Are all apostles? Are all prophets? Are all teachers? Are all workers of miracles? Have all the gifts of healing? Do all speak with tongues? Do all interpret?”

It seems as though some had become puffed up and proud of their gifts, and looked down upon others whom they thought had a “lesser” gift. They failed to understand that every gift of the Spirit was valuable.

The following is one of Aesop’s fables and it illustrates this point as well.

“A Stag overpowered by heat came to a spring to drink. Seeing his own shadow reflected in the water, he greatly admired the size and variety of his horns, but felt angry with himself for having such slender and weak feet. While he was contemplating himself, a Lion appeared at the pool and crouched to spring upon him.

“The Stag immediately took to flight, and exerting his utmost speed, as long as the plain was smooth and open, kept himself easily at a safe distance from the Lion. But entering a wood he became entangled by his horns, and the Lion quickly came up to him and caught him. When too late, he thus reproached himself: ‘Woe is me! How I have deceived myself! These feet which would have saved me I despised, and I gloried in these antlers which have proved my destruction.’”

The moral of the story is what is most truly valuable is often underrated. Indeed, as Christians we should never lessen the gifts and talents that God has given us.

What to do:
✞ Thank God for every gift He has given you.
✞ Use your spiritual gifts for His glory.
✞ Never look down on the gifts possessed by others.

Pastor’s Note: I do believe that some of the gifts listed in I Corinthians 12 are no longer in existence today; i.e. tongues, interpretation of tongues, and healing, just to name a few.