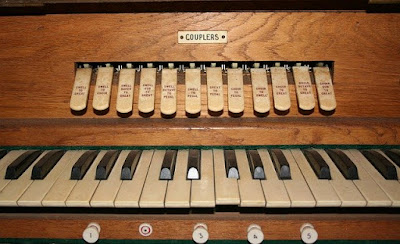 Key Words: Having then gifts differing

A talented organist in the days before motor-driven or electric organs gave a magnificent concert in which the big pipes on the organ sent forth glorious and thunderous tunes. After people finished congratulating the organist, the little fellow who had worked with all his might at the bellows remarked, “We did pretty well, don’t you think?” The organist scornfully replied, “And what did you do?” giving the young lad no credit at all. Sometime later during another concert, the organist came to the stormy passage that required all the wind the bellows were capable of producing. But instead of a great thunderous sound, the organ began to fade away. The organist signaled for more wind. Instead the little fellow pulled the curtain aside and said, “Is it I or is it we?”

Every gift is needed.

What to do:
✞ Use your gift for God’s glory.
✞ Understand that every gift is important.
✞ Remember though, the gift was given to you through the Spirit, so thank God for it.

THE HOLY SPIRIT
We may hear choice preachers
Expound God's written Word,
But, unless the Holy Spirit teaches,
It's as though we'd never heard.
He gives light to darkened hearts,
And sight to blinded eyes,
And the precious Truth He imparts
Is eternally realized.
He never speaks of Himself
As He functions here on earth,
But draws lost souls to Christ,
Repentance, and new birth.
He's the One sent by our Lord
To comfort, teach, and Guide,
Entering our hearts at salvation
Forevermore to abide.
He's the third person of the Trinity,
Equal with the Father and Son;
Each have different functions,
Yet, our God is One.
The Holy Spirit can be blasphemed,
Rejected, quenched, and grieved;
Or He can be heard and followed,
Submitted to, and received.
Father, help us to depart from evil,
And all known sin,
As we learn to listen to The Holy Spirit-
Your still, small voice within.