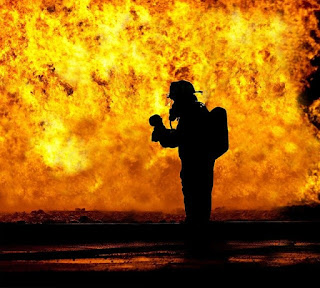 Key Words: Quench not the Spirit

The word quench means “to extinguish a fire”. We are not to extinguish the fire of the Holy Spirit in our personal lives and in our church.

Wilbur Chapman tells the following which illustrates the fire of the Holy Spirit.

“The remedy for a church that won’t budge is FIRE. Have you ever watched a little boy try to get a big old box turtle to move? The more he coaxes it, the slower it goes. He then gets a stick and tries to club it. What does the turtle do? It just pulls its head, feet and tail inside its shell for a spell. It just sits there. Those turtles, you know, are a patient lot. You can’t get them to move by ordinary means when they get peeved. But you just watch that little boy. You can almost see the wheels turning in his mind. He’s nobody’s dummy. He gets one corner of the old turtle and props it up with a stick. Then he runs into mama’s kitchen and pulls the chair over to the cabinet. He scrambles up on the chair and then on to the cabinet. From there he can reach into the cupboard where the matches are kept. With a fist full of matches he scurries down off the cabinet onto the chair. He now runs outside to see if old turtle is still up on the homemade jack like he’s waiting for an oil change. Now what does the little boy do? …… You guessed it. Maybe it was you that did this! He lights the match and holds it under the old turtle. Well, let me tell you, it isn’t long until things begin to happen. Old turtle backs off of his homemade jack kind of quick like and you’ve never seen a turtle hot foot it so fast in all your life. He doesn’t ask questions. He doesn’t need to be told which way is north or which way is south.

“If you think a turtle can’t go fast, put some fire under Bro. Poke Turtle and he’ll make the gravel fly. He’ll do a wheelie…and did you know that if God could put some FIRE under us it would burn out rebellion, stubbornness, starchiness, and the lack of concern in this age. It would burn out all the formality and the cobwebs of programs, and put life, vitality, heartbeat, and pulsation into the church until it could do the things that God intended it to do. May the Eternal One inject into the moral plasma of our being that energizing drive, until we’ll go forth with burning hearts, brimming eyes, and bursting lips.”