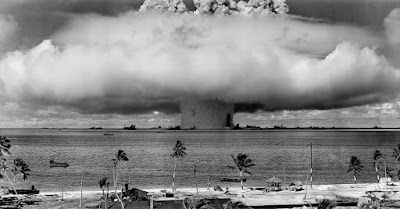 Daily air raids were taking a heavy toll on Japan during the summer of 1945; defeat seemed imminent. On July 26, Allied leaders issued the Potsdam Agreement: “We call upon the government of Japan to proclaim now the unconditional surrender of all Japanese armed forces. The alternative for Japan is prompt and utter destruction.” But the offer was also in some ways generous; it allowed Japanese soldiers to return home without imprisonment.

Emperor Hirohito believed the Potsdam peace terms “were the most reasonable to be expected.” But Prime Minister Kantaro Suzuki disagreed; he felt Japan still had some negotiating leverage with the Russians. Soon, Suzuki was telling reporters that Japan must mokusatsu the Allied offer.

Mokusatsu literally means “to kill with silence.” Suzuki later claimed he had meant “no comment.” But the Japanese news agency, Domei, quickly translated the word as “ignore.” With this, the bombing of Hiroshima and Nagasaki was virtually inevitable.

Just a week later, on August 6, 1945, the Enola Gay took off on its fateful mission. At 8:15 A.M., bombardier Major Thomas Ferebee had his target in his sights: the Aioi Bridge crossing the Ota River in Hiroshima.

About a half mile from his target, the crew of the Lonesome Lady, which had been shot down just ten days earlier, were being held as war prisoners along with fliers from two other American planes – at least 10 GIs in all.

Although the solid brick of their cells managed to withstand the awesome initial blast, only three of these prisoners are known to have survived the explosion. Navy pilot Normand Brissette and the Lonesome Lady’s gunner, Ralph Neal, stayed nose-deep in a cesspool until the flames died down. As soon as they emerged, they were recaptured by the Japanese. During the next days each suffered acutely with oozing sores and constant vomiting, the result of radiation exposure. Both men died slow and horrible deaths.

The third American who survived the explosion died as a scapegoat for the bombing. History doesn’t record his name, but an eyewitness called him “the handsomest boy I ever saw.” He was tied to the remains of the Aioi Bridge with a placard that said: “Beat This American Soldier Before You Pass.” Besides these military prisoners, more than 3,000 Japanese-American civilians were stranded in Hiroshima when the war began. Of those who survived the blast, perhaps 1,000 returned to the United States.

The story of any single person who endured the atomic attack on Japan is appalling. If we then consider statistics in light of these scenes of individual agony, the extent of human suffering begins to stagger the mind: the two bomb blasts at Hiroshima and Nagasaki killed 300,000 people.

Think of it. The evil communication of one man using one word, mokusatsu (ignore), resulted in the death of thousands. Never think that your words are not important for words are powerful, and they either bless or curse!!! What a responsibility we have to use our words with great care and caution.

As always, thanks for reading...and be careful what you say and how you say it.

What to do:
✞ Words build but they can kill and will cause a conflict, so use them wisely.