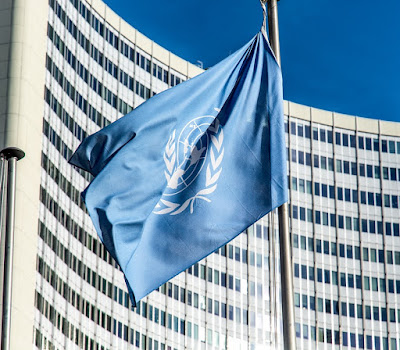 Key Verse: Verse I Thess. 5:3 – “For when they shall say, Peace and safety; then sudden destruction cometh upon them, as travail upon a woman with child; and they shall not escape.”

Key Words: For when they shall say, Peace and safety; then sudden destruction cometh

A big thing on the secular humanist’s agenda is world peace. Most Humanists call for universal disarmament and expanded power for the United Nations as two steps necessary for the implementation of a democratic world community. “The first steps in avoiding a nuclear cataclysm and preserving democracy are to agree on universal disarmament,”1 according to Erich Fromm. *Linus Pauling believes, “The only hope for the world lies in achieving control of the methods of waging war and ultimately to reach the goal of total and universal disarmament.” Once disarmed, nations will be more willing to cooperate, less intent on enforcing nationalistic boundaries, and ready to merge into a global community. At present, the only organization that is truly global in scope is the United Nations. Thus, Secular Humanists support expanded power for this institution. William Carleton says, “Our hopes for political internationalism may have to center around the United Nations.”

The world as we know it today will never be at peace, nor will disarmament bring peace, and the UN will certainly never produce peace. Only Jesus can bring permanent peace and He will at His coming.

“The Personnel Journal reported this incredible statistic: since the beginning of recorded history, the entire world has been at peace less than eight percent of the time! In its study, the periodical discovered that of 3530 years of recorded history, only 286 years saw peace. Moreover, in excess of 8000 peace treaties were made--and broken.” ~ Moody Bible Institute, Today In The Word, June, 1988, p.33.

What to do:
✞Look to Jesus and not the U.N.

* Linus Pauling was an American chemist, peace activist, and educator. He also won a Nobel Peace Prize in 1962.