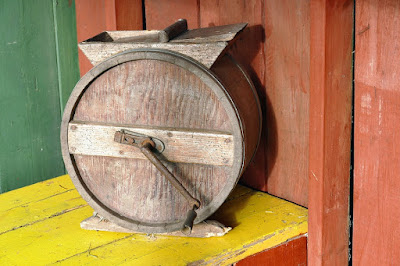 Key Words: Surely the churning of milk bringeth forth butter

I recently saw an ad in the newspaper which brought back a flood of memories.

It was an old-fashioned butter churn. Maybe you remember them. This one was a tall wooden vessel with a hole in the cover, through which a round handle protruded with paddles on the lower end. By patient, hard work – plunging the paddles up and down in the cream – you can make butter provided the temperature is right. How well I remember – it seemed like hours before the butter would separate! But Aunt Sarah would always say, “if you’ll only keep on, it will come sooner or later.” Yes, the secret was in keeping on – not giving up. Butter comes only from churning and churning. To stop is to fail!

The story is told of two frogs that fell into a tub of cream. The one looked at the high sides of the tub which were too difficult to crawl over and said, “It is hopeless.” So he resigned himself to death, relaxed, and sank to the bottom! The other frog determined to keep on swimming as long as he could. “Something might happen,” he said – and sure enough it did! He kept kicking, kicking, churning, churning, and finally, “Eureka!” He found himself on a solid platform of butter, floating on top of his buttermilk bath. He hopped out safely, and only because he would not give up. Paul wrote, “And let us not be weary in well doing; for in due season we shall reap, If…” (Galatians 6:9). You finish the verse.

The moral of the story is do not ever, ever give up.

What to do:
✞ Give up and lose, or…
✞ Keep going, and praying, and believing, and churning away – and make some butter that will butter up your life.