Daily Devotion: You Tell Him, Senator 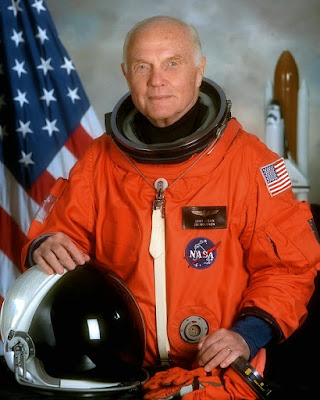 Key Verse: Verse 17 – “ He that speaketh truth sheweth forth righteousness: but a false witness deceit.”

Key Words: He that speaketh truth

While former Senator John Glenn and I would never be in agreement in the political arena, I do admire what he said from the floor of the Senate on January 26, 2004. Senator Glenn’s address was sparked by one of his colleagues, Howard Metzenbaum, who said, “How can you run for Senate when you’ve never had a real job?” The following is Senator Glenn’s response.

“I served 23 years in the United States Marine Corps. I served through two wars. I flew 149 missions. My plane was hit by anti-aircraft fire on twelve different occasions. I was in the space program. It wasn’t my checkbook, Howard; it was my life on the line.

“It was not a nine-to-five job where I took time off to take the daily cash receipts to the bank. I ask you to go with me as I went the other day to the Veteran’s Hospital and looked at those men with their mangled bodies, and I want you to tell them they didn’t hold a job! You go with me to the space program at NASA and go, as I have gone, to the widows and orphans of Ed White, Gus Grissom, and Roger Chaffee, and you look those kids in the eye and tell them their dads don’t hold a real job. You go with me on Memorial Day and you stand in Arlington National Cemetery, where I have more friends buried than I would like to remember, and you watch those flags waving. You stand there and you think about this nation, and you tell me that those people didn’t have a real job. I will tell you, you should be on your knees everyday of your life thanking God that there were some men who held a real job – and their job required a dedication to purpose, and a love of country, and a dedication to duty that was more important than life itself. Their sacrifice is what makes this country great. I have held a job – a real job. What about you?”

What to do:
✞ Speak the truth, but make sure it’s true and always given in love.