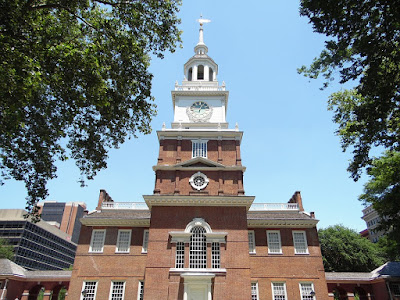 Key Verse: Verse 17 - "Now the Lord is that Spirit: and where the Spirit of the Lord is, there is liberty.”

Key Words: where the Spirit of the Lord is, there is liberty

According to the well-known story, on July 4, 1776, a boy ran to the steeple of Philadelphia’s Independence Hall and told the feeble, white-haired bell ringer that independence had just been declared. Rejuvenated by the news, the old man rang the bell so vigorously that it cracked.

In fact, the bell never rang upon the news of independence. Declaration was not actually proclaimed until July 8, and the crack had occurred years before. The great bronze bell, inscribed with the words “Proclaim Liberty Throughout All The Land Unto All The Inhabitants Thereof,” had been ordered from London in 1751 to commemorate the 50th anniversary of Pennsylvania’s democratic constitution. On arrival, the bell was hung in the belfry of the State House, which was later known as Independence Hall. The bell first cracked at this time, while it was being tested. It was melted down, recast, and rehung. In 1835 it cracked again – perhaps, as legend has it, on the day it tolled for John Marshall’s death. The clappers would have been muffled, however, which makes that legend unlikely. It pealed for the last time on George Washington’s birthday, in 1846, after which it was taken down.

It was not until 1839 – when it was used as a symbol of abolitionists because of its inscription – that the State House bell came to be called the Liberty Bell. In 1847, George Lippard fabricated the popular story about the bell cracking on the first Independence Day in a book called Washington and His Generals, or Legends of the American Revolution.

This is how the Liberty Bell was launched as one of the nation’s most potent and profitable symbols of patriotism and started to be depicted on every conceivable item from neckties and coffee cups to Liberty Bonds.

But true liberty is not found through patriotism. True liberty only comes through the “Spirit of the Living God.” Let us forever ring this bell for by it all men can be liberated.

What to do:
✞ Let the freedom bell of salvation through Jesus Christ be heard everywhere you go.