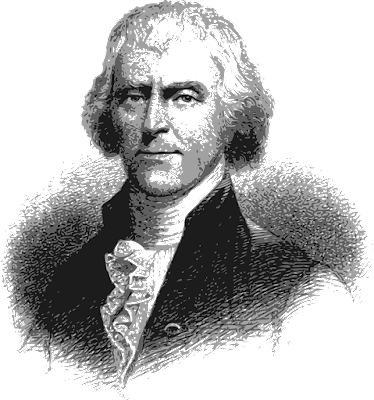 Key Verse: Verse 18 - "By much slothfulness the building decayeth; and through idleness of the hands the house droppeth through."

Key Words: and through idleness of the hands the house droppeth through

The following article was taken from Reader’s Digest Strange Stories and Amazing Facts: America’s Past.

“At a White House dinner for Nobel Prize winners, John F. Kennedy called his guests ‘the most extraordinary collection of talents that has ever been gathered at the White House, with the possible exception of when Thomas Jefferson dined alone.’

“Among America’s great statesmen, Jefferson stands out as a Renaissance man with an incredible range of interests, knowledge, and abilities. In the thick of politics for forty years, he still found time for other pursuits, including farming, architecture, law, geography, botany, natural history, playing the violin, and enjoying fine food and wine. With an inquiring mind and an incisive intellect, he wrote prodigiously and insightfully about anything that interested him. His writings on agriculture alone fill a 704-page book. An avid reader, he amassed a personal library of 6,487 volumes that became the nucleus of the Library of Congress in 1815.

“More than an armchair genius, Jefferson found practical application for his talents. A dedicated farmer, he was the first person in North America to raise tomatoes for food (they were considered poisonous), and his experiments with rice made the nation a leading producer of that crop. He also invented a new moldboard for the plow. Among his other inventions were a swivel chair, a pedometer to measure his walks, a chair that folded into a walking stick, a dumbwaiter, a revolving music stand, and a calendar clock. (So that others could have free use of his inventions, he patented nothing.) A talented architect, he adapted Roman classicism to native materials, developing a distinctive American style for the University of Virginia in Charlottesville. Not only did he design its buildings, he was also its general contractor, bookkeeper, overseer during construction, and landscape architect.

Perhaps Jefferson is best summed up in his own words: “Determine never to be idle. It is wonderful how much may be done if we are always doing.”

Today we need more politicians like Thomas Jefferson who have determined not to live off the merits of others but to blaze a trail for others to follow. That’s leadership. That’s what’s needed!

What to do:
✞ Teach your sons and daughters to determine to never be idle, and with all they do to put God first.
✞ Remember, an idle mind is the devil’s workshop.