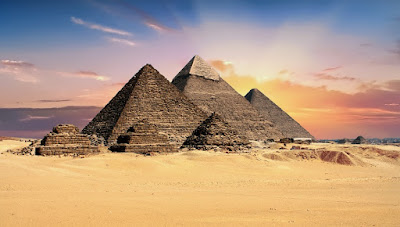 Key Verse: Verse 8 – “They have turned aside quickly out of the way which I commanded them: they have made them a molten calf, and have worshipped it, and have sacrificed thereunto, and said, These be thy gods, O Israel, which have brought thee up out of the land of Egypt.”

Key Words: These be thy gods

The ancient Egyptians knew their country as the black land from its dark-colored dirt. We primarily know Egypt today as a place of sand and desert; but Egypt is divided into two regions: one of black land, and the other of desert and sand.

The early Egyptians were descendants of Ham (Genesis 10:6). From 1900 to 1750 B.C. Egypt became known for their classical literature and their great commerce. Until around 1100 B.C. they were known as a world dynasty. It was during these great years of world dominance that Israel served Egypt as slaves until Moses led Israel out of bondage around 1500 B.C.

Egypt’s primary god during this time period was Osiris, god of the Nile. They also worshipped Amun-Re, the moon god. There were far too many false gods to name them all; but Egypt was steep into idolatry which eventually brought their demise.

In The Wounded Healer, Henri Nouwen retells a tale from ancient India: Four royal brothers decided each to master a special ability. Time went by, and the brothers met to reveal what they had learned.

“I have mastered a science,” said the first, “by which I can take but a bone of some creature and create the flesh that goes with it.”

“I,” said the second, “know how to grow that creature’s skin and hair if there is flesh on its bones.”

The third said, “I am able to create its limbs if I have flesh, the skin, and the hair.”

“And I,” concluded the fourth, “know how to give life to that creature if its form is complete.”

Thereupon the brothers went into the jungle to find a bone so they could demonstrate their specialties. As fate would have it, the bone they found was a lion’s. One added flesh to the bone, the second grew hide and hair, the third completed it with matching limbs, and the fourth gave the lion life. Shaking its mane, the ferocious beast arose and jumped on his creators. He killed them all and vanished contentedly into the jungle.

We too have the capacity to create what can devour us. Goals and dreams can consume us. Possessions and property can turn and destroy us – unless we first seek God’s kingdom and righteousness, and allow Him to breathe into what we make of life.

What to do:
✞ Make sure God is supreme in your life.