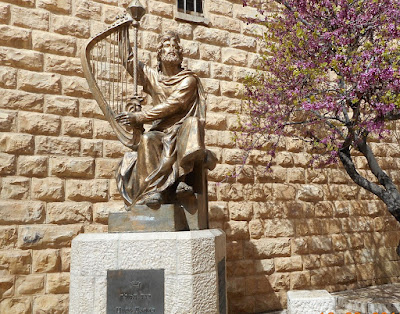 Key Verse: Verse 13 – “Then Samuel took the horn of oil, and anointed him in the midst of his brethren: and the Spirit of the LORD came upon David from that day forward. So Samuel rose up, and went to Ramah.”

Key Words: and anointed him in the midst of his brethren

David’s rise to the throne was brought about by the murder of Ishbosheth, and the deaths of Baanah and Rechab. (See II Samuel 3:8 and 4:8-12.)

J. G. Greenbough says the following in regard to David.

“Few of the historical figures of the world have been formed in a bigger mould. In spite of his sins, awful blunders, and moral falls, he stands out in huge bulk as one of the world’s master minds; a far-seeing statesman, a gifted thinker and poet, a brilliant soldier, a man of charming personality and winsome attractiveness, a man of infinite patience and unwearying energy, and every inch a king. If he had been a vain man, what a loud story he would have told of his own mighty doings and conquests of difficulties; how loftily he would have carried himself among his throngs of courtiers and flatterers. David the king, poet, soldier, genius, in one line just kneels down, strips himself of all those special gifts and distinction which makes a man bulk large in the eyes of his fellowmen, and takes his place with the rest of us, saying, ‘If we have any greatness at all, it is the gentleness of God that gives it to us.’”

I am convinced that David was the apple of God’s eye because of his humility. When confronted with a wrong he had done, David never put up his defenses; he simply confessed them and asked for God’s forgiveness. Oh, God give me a spirit like that of David!

What to do:
✞ Ask God to give you the spirit of David.