Daily Devotion: Do You Know About The Tomb Of The Unknown Soldier? 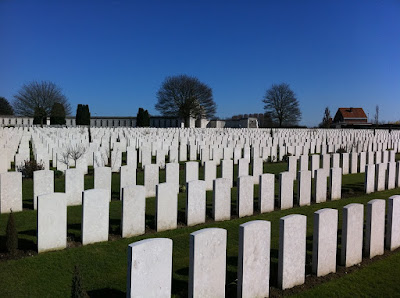 Key Words: and I know them

On October 22, 1921, four bodies were exhumed at four cemeteries in France, near sites where American soldiers were known to have fallen in the War to End All Wars.

Those selecting the remains had to make sure they were indeed Americans but were otherwise truly unidentifiable, with no clues as to name, rank, or service. For evidence they relied upon location of the original burial, gunshot wounds, and fragments of uniform. The bodies were embalmed, placed in similar coffins, and taken to the city hall at Chalons-sur-Marne.

In a simple ceremony on the morning of October 24, Sergeant Edward S. Younger, a soldier decorated for heroism in the war, entered the chapel, circled the four caskets, and choosing at random placed a spray of white roses on the second from the right. The chosen soldier was interred at Arlington National Cemetery on Armistice Day. On his white marble tomb appears this inscription: “Here Rests in Honored Glory an American Soldier Known but to God.”

Are you glad that Jesus knows you? Why he even knows the name of the soldier in the tomb of the unknown.

We do serve a wonderful God who knows all about us. It matters little to me what others say about me, because in reality most of our critics know little about us; it does matter though what Jesus knows about me! Now that matters to me.

What to do:
✞ Know with certainty that Jesus knows who you are. The question is do you know Him?