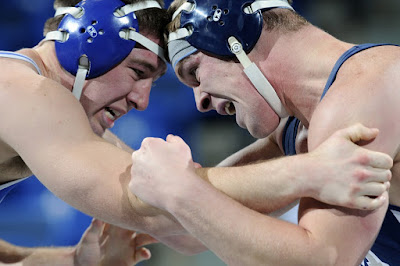 Key Verse: Verse 12 - “And the younger of them said to his father, Father, give me the portion of goods that falleth to me. And he divided unto them his living.”

Key Words: give me the portion of goods that falleth to me

So the father did; he gave his son his portion and off he went thinking that he had life by the throat and all would be well. Well, it won’t. The boy left with his head held high and an arrogant spirit. He wound up with his head bowed low and a humble spirit. He left full of himself and came back empty.

A young man, a successful wrestler, challenged his father once. He was the all-state wrestling champ, in the unlimited weight category in fact. He weighed 360 pounds as a senior in high school – really big and strong. He had a period of rebellion where his father wanted him to do something and he told his father he wasn’t gonna do it. His father thought he was hard of hearing. “What?” The young man then got more indignant. “I said, I isn’t gonna do it.” The father simply turned around and started walking upstairs, beckoning his son to come with him. When they got to the top of the stairs, he said, “I’m going to help you pack, because it’s obvious you are grown and don’t need me. Since you are grown and can make it on your own, I’ll help you pack.” The young man started packing with an attitude, huffing around the room and throwing things into a suitcase. Item after item got unpacked as his dad pulled things out as he told his son, “No that’s mine. I paid for it!”

The teenager was mad. He was determined to be autonomous and independent from his dad. He took the suitcase and walked out of the house, angry and mad, only to discover that he had no car. Even his friend’s parents wouldn’t let them come out to help him. It was freezing outside and snow was falling heavily. This guy discovered that while he didn’t prefer home, compared to what was happening outside, home really wasn’t that bad.

See, the father, the loving father, had to let the prodigal son go and discover that while he didn’t like everything at home, out in the world on his own there was no protection, covering, or love. He had to let him experience the harsh reality.

What to do:
✞ Sometimes in order to get them back we have to let them go.