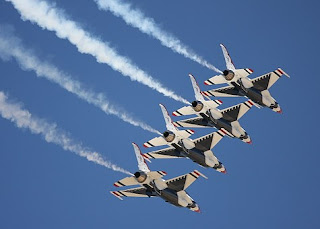 Key Verse: Verse 17 - "Brethren, be followers together of me, and mark them which walk so as ye have us for an ensample."

Key Words: be followers together of me

It was on a Monday morning, January 18, 1982, Major Nonn Lowery led the Thunderbirds, the Air Force’s flying precision team, into a clear desert sky. These Air Force fighters broke from their usual diamond formation to practice flying abreast (side by side). Major Lowery (the leader of the Thunderbirds) was flying the number one jet. At all times the other pilots fly by response to Major Lowery who was known as the boss. Major Dave Robinson (pilot number two) says “the boss is our world, whether we’re right side up or upside down, it makes no difference where the ground is because our eyes are always on the boss.”

It was from this line abreast formation that the team began to execute the line abreast loop. At the top of the loop all four planes were upside down and they began to dive. The boss pulled back on his stick to complete the loop, but a tiny piece of metal had come loose and prevented him from pulling out of the loop. The other pilots kept their eyes focused on the boss as they had been trained to do. The four planes in formation slammed into the earth traveling at 490 mph. The pilots of numbers two, three, and four never had a clue what was happening because their focus was totally on their leader, even though they were in one of the most technologically developed machines known to man. They crashed because they were following their leader just as they should have, which brings me to the point.

The responsibility of being a parent, pastor, or teacher is so much bigger than most people can fathom. Being the right kind of leader is so much more important than anything else we can do. We must be keenly aware that our example is not so much taught as it is caught. That’s one of the reasons that today’s youth are slamming into the world at such a high rate of speed, they are becoming spiritual fatalities because of poor leadership. Parents, staff, Sunday School teachers, deacons, leaders today, someone has their eyes focused on you. You are the boss they are following. The stakes are far too high for us to have a mechanical failure in the cockpits of our homes, churches and schools. We as leaders must take the challenge of edifying through our example. If not, we will lose our next generation of leaders.

What to do:
✞ A failure to lead right will always lead to failure.