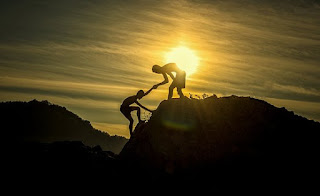 Key Verse: Verse 13 - “And when the Lord saw her, he had compassion on her, and said unto her, Weep not.”

This widow and her deceased son are unnamed. We really don’t know who they were; but we do know that God took a dead son and a weeping mother and used them to accomplish something extraordinary (verse 16).

I believe that when Christ told her to weep not, she stopped weeping. Why? Because her faith in Jesus was that strong. She trusted Him explicitly.

Tim Hansel tells us about a day when he and his son, Zac, were out in the country, climbing around in some cliffs. Suddenly he heard a voice from above him yell, "Hey Dad! Catch me!" He turned around to see Zac joyfully jumping off a rock straight at him. He had jumped and then yelled "Hey Dad!" He said, “I became an instant circus act, catching him. We both fell to the ground. For a moment after I caught him I could hardly talk. When I found my voice again I gasped in exasperation: "Zac! Can you give me one good reason why you did that???"

He responded with remarkable calmness: "Sure...because you're my Dad." His whole assurance was based in the fact that his father was trustworthy. Zac could live life to the hilt because he could be trusted. Isn't this even more true for a Christian?

What to do:
✞ We will never be extraordinary until we trust the Lord explicitly. (Proverbs 3:5-6)