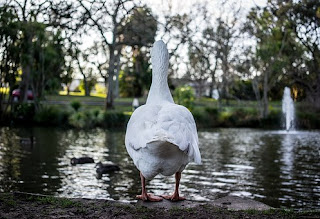 Key Verse: Verse 22 - “I Tertius, who wrote this epistle, salute you in the Lord.”

Key Words: I Tertius, who wrote this epistle

Tertius was evidently, at least for the book of Romans, Paul’s amanuensis (a person who writes what another dictates), no doubt a blessing to Paul. It may seem like a small thing but when one is willing to use his or her abilities for God, small becomes very large.

Once upon a time, the animals decided they should do something meaningful to meet the problems of the new world. So they organized a school.

They adopted an activity curriculum of running, climbing, swimming and flying. To make it easier to administer the curriculum, all the animals took all the subjects.

The duck was excellent at swimming; in fact, better than his instructor. But he made only passing grades in flying, and was very poor at running. Since he was slow in running, he had to drop swimming and stay after school to practice running. This caused his web feet to be badly worn, so that he was only average in swimming. But average was quite acceptable so nobody worried about that--except the duck.

The rabbit started at the top of his class in running, but developed a nervous twitch in his leg muscles because of so much make-up work in swimming.

The squirrel was excellent in climbing, but he encountered constant frustration in flying class because his teacher made him start from the ground up instead of from the treetop down. He developed "charlie horses" from overexertion, and so only got a C in climbing and a D in running.

The eagle was a problem child and was severely disciplined for being a non-conformist. In climbing, he beat all the others to the top of the tree, but insisted on using his way to get there.

The obvious moral of the story is a simple one: Each creature has its own set of capabilities in which it will naturally excel – unless it is expected or forced to fill a mold that doesn’t fit. What is true of creatures of the forest is true of Christians in the family. God has not made all of us the same. It’s OK to be you … so relax. Enjoy your own capabilities, cultivate your own style. Appreciate the members of your family or fellowship for who they are, even though their outlook or style may be miles different from yours. Rabbits don’t fly. Eagles don’t swim. Ducks look funny trying to climb. Squirrels don’t have feathers. Stop comparing!

What to do:
✞ You become extraordinary for God’s glory when you do what you can with the abilities God has given you.