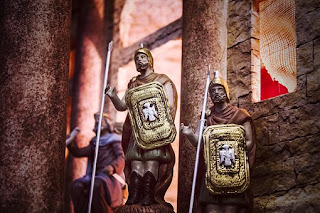 Key Verse: Verse 10 - “When Jesus heard it, he marvelled, and said to them that followed, Verily I say unto you, I have not found so great faith, no, not in Israel”

Key Words: I have not found so great faith

Here is what we know of the centurion.
While all of this is good that thing that takes him from being ordinary to extraordinary was his faith, which was greater than any faith Jesus had seen. Faith in God takes us from the ordinary to being extraordinary.

Sir Wilfred Grenfell, medical missionary in Labrador, found himself adrift on an ice flow, headed out to sea. He mercifully killed his dogs, made a coat out of their hides, put up a distress flag, and lay down and slept. Later he said, “There was nothing to fear. I had done all I could, the rest lay in God’s hands.” Now, that is faith!

Edna Butterfield writes: “My husband, Ron, once taught a class of mentally impaired teenagers. Looking at his students’ capabilities rather than their limitations, Ron got them to play chess, restore furniture and repair electrical appliances. Most important, he taught them to believe in themselves. Young Bobby soon proved how well he had learned that last lesson. One day he brought in a broken toaster to repair. He carried the toaster tucked under one arm, and a half-loaf of bread under the other.” Now, that’s faith!

Today, you can be ordinary or by faith in God, be extraordinary.

What to do:
✞ Remember, when faith goes to the market, it carries a basket.