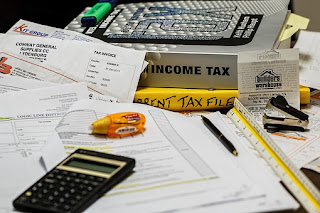 Key Verse: Verse 21 - "They say unto him, Caesar's. Then saith he unto them, Render therefore unto Caesar the things which are Caesar's; and unto God the things that are God's."

Key Words: Render therefore unto Caesar the things which are Caesar’s

Let’s face it. I know of no one who likes to pay taxes. We do it, but we don’t like it. But did you know that until the Civil War, there was no federal income tax? The government was supported largely by bonds, excise taxes, and “external revenue” from tariffs on imported goods. The expensive war, however, led legislators to explore new sources of “internal revenue” from citizens at home. On August 5, 1861, a 3% tax on annual incomes over $800 was adopted, but no one bothered to collect it, perhaps because it met such a small part of government needs. On July 1 of the following year, a new tax law was signed, giving America its first operable federal income tax. This was repealed in 1872—it had just been a temporary way of funding the war debt—and no new income tax was proposed until 1894, when the government needed money to meet financial crises caused by a monetary panic. But on May 20, 1895, the Supreme Court ruled that the whole idea of an income tax was unconstitutional, since the tax would not be distributed among the states in proportion to their populations. It took the 16th Amendment (ratified on February 3, 1913) to make income tax legal.

Oh, that dreaded 16th Amendment!! But with all that being said, Jesus paid taxes and did command that that which was owed to Caesar be paid to Caesar. So I do, not because of Caesar, but because of God’s command.

What to do:
✞ Obey God in all things.