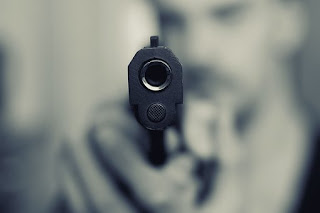 Key Verse: Verse 36 - "Then said he unto them, But now, he that hath a purse, let him take it, and likewise his scrip: and he that hath no sword, let him sell his garment, and buy one."

Key Words: he that hath no sword, let him sell his garment, and buy one

Let me begin by saying that I am not a member of the National Rifle Association (NRA). When it comes to gun control I have no dog in this fight. On the other hand, I don’t want to base my beliefs on events that may occur, but rather my beliefs should be based on God’s Word, in spite of tragic events involving guns.

I do realize that “guns” are not mentioned in God’s Word, but weapons are such as swords, spears, bows, etc. As you study God’s Word, you find that weapons were primarily used for three purposes.

First, they were used in war. Judges 18:16, “And the six hundred men appointed with their weapons of war, which were of the children of Dan, stood by the entering of the gate."

Secondly, they are used for hunting as seen in Genesis 27:3. “Now therefore take, I pray thee, thy weapons, thy quiver and thy bow, and go out to the field, and take me some venison;”

Thirdly, weapons were also needed for protection. Nehemiah 4:17, “They which builded on the wall, and they that bare burdens, with those that laded, every one with one of his hands wrought in the work, and with the other hand held a weapon.”

The answer to the problem facing us is not “gun control.” It’s a sin problem of our old sinful human nature. So let’s not jump to assumptions and begin to cry out with all the humanists to ban guns; but rather let us base our beliefs on God’s Word – not man’s.

What to do:
✞ Look to God’s Word for solutions –not man’s wisdom.