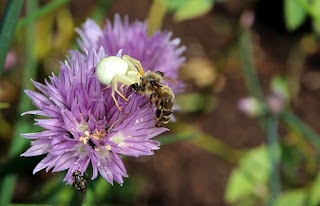 Key Words: which flattereth with her words

There is a certain kind of wasp that stings spiders. It'll sting a spider and its sting will paralyze the spider for a few moments. The female wasp will then lay her eggs in the abdomen of the spider. So this spider now has in its belly eggs of a wasp and the spider has no idea.

After the spider regains its ability to move, sooner or later, it will begin doing what spiders do. It will make a web. After ten days, the eggs in the abdomen of the spider will begin to secrete a substance that causes the spider to stop making the web and start making a cocoon.

Spiders don’t make cocoons. That’s not what spiders do. But because this foreign element that has been introduced to it by the female wasp, it is now acting unnaturally. It’s making a cocoon. When the cocoon is near finished, it’s time for life to come from the egg. That life comes from the eggs, kills the spider, and the baby wasps live in the cocoon that should’ve never been made in the first place – except that a female wasp got ahold of the spider.

Today we have a whole generation of young people who are being filled with the “poison” of flattery which when fallen for will destroy a life. Think about it!!

What to do:
✞Remember that flattery is like homemade soap, 90% “lye.”