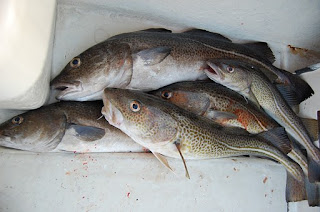 Key Verse: Verse 28 – “And we know that all things work together for good to them that love God, to them who are the called according to his purpose."

Key Words: all things work together for good

Just about every one of us can quote Romans 8:28. I would venture to say if it’s not your favorite verse, it would certainly make your list of favorite verses. “And we know that all things work together for good to them that love God, to them who are the called according to his purpose” (Romans 8:28). This verse is often quoted when we go through trials and adversities of life, but it is these trials and adversities that make us “right.”

In the northeastern United States cod fish are not only delectable, they are a big commercial business. There is a market for eastern cod all over, especially in sections of the Midwest and west. But the public demand posed a problem to those who were responsible for shipping the cod. At first they froze them but the freezing took away much of the flavor, so they experimented with shipping them alive in tanks of seawater; but that proved to be worse than freezing them. Not only was it more expensive, the cod still lost its flavor and in addition became soft and mushy. The texture was seriously affected.

Finally some creative soul solved the problem in a most unique way. The codfish were placed in a tank of seawater along with their natural enemy, the catfish. From the time the cod left the east coast until it arrived at its western destination, those ornery catfish chased the cod all over the tank! And you guessed it – when the cod arrived at the market they were as fresh as when they were first caught.

Now, a question comes to mind: can you name some catfish swimming in your tank? Maybe you live with your catfish or work with them on your job. I am convinced that every believer has at least one catfish in their tank whose call in life is to keep you fresh for God’s enjoyment. Yes sir, and yes ma’am, all things do “work together for good to them that love God, to them who are the called according to his purpose.”

What to do:
✞ Remember, your enemy may be the one keeping you “fresh” with God.