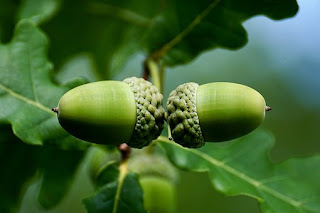 Key Verse: Verse 14 - "And went after the man of God, and found him sitting under an oak: and he said unto him, Art thou the man of God that camest from Judah? And he said, I am.”

Key Words: and found him sitting under an oak

The oak tree is symbolic of disobedience!!

As you read the story of the young man of God, it becomes very clear that he disobeyed God (verses 16-17). The principle is that disobedience will always lead to destruction.

If you will remember, it was Absalom who disobeyed the command of God to honor his father; and as a result, his hair was caught in an oak tree, which eventually led to his death.

The oak tree is symbolic of disobedience!!

In the Houston Zoo in Texas you might find an unusual phenomenon. Although you pay to see and learn about animals, the alligator exhibit can tell you much more about people. In every other cage you do not find a large display of scattered coins. You see normal habitat, as you might expect, without a spattering of loose change. So why is there frequently money in with the alligators? Is it because there is water, and people seem enamored with throwing pocket change into water?

There are other exhibits with plenty of water, but they do not have all the nickels, dimes, and quarters. The reason for this abundance of money stems from a sign by the alligators. As you read to learn more about these interesting creatures, the zoological society presents a reminder not to throw money into the water, as it only takes one coin, digested by an alligator, to kill the huge reptile. To the chagrin of the zoo staff, coins are often thrown all around the alligators. Whether it is coins in the alligator pit or just one tree in a garden called Eden, sinful man has a tough time obeying the rules.

What to do:
✞ When you think of the oak tree, remember the importance of obedience to God.