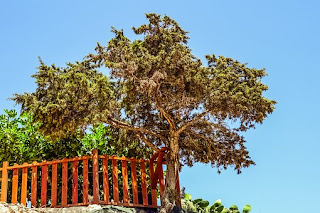 Key Verse: Verse 4 - “But he himself went a day’s journey into the wilderness, and came and sat down under a juniper tree: and he requested for himself that he might die; and said, It is enough; now, O LORD, take away my life; for I am not better than my fathers."

Key Words: and came and sat down under a juniper tree

The juniper tree is the tree of despair.

During his days as President, Thomas Jefferson and a group of companions were traveling across the country on horseback. They came to a river that had left its banks because of a recent downpour. The swollen river had washed the bridge away. Each rider was forced to ford the river on horseback, fighting for his life against the rapid currents. The very real possibility of death threatened the riders, which caused a traveler who was not part of their group to step aside and watch. After several had plunged in and made it to the other side, the stranger asked President Jefferson if he would ferry him across the river. The President agreed without hesitation. The man climbed on, and shortly thereafter the two of them made it safely to the other side.

As the stranger slid off the back of the saddle onto dry ground, one in the group asked him, “Tell me, why did you select the President to ask this favor of?”

The man was shocked, admitting he had no idea it was the President who had helped him. “All I know,” he said, “is that on some of your faces was written the answer ‘No,’ and on some of them was the answer ‘Yes.’ His was a ‘Yes’ face.”

So let me challenge you, do not spend your life under the juniper tree of despair, invest your life in others for God’s glory.

What to do:
✞ Do not camp under the juniper tree of despair.
✞ Invest your life in others for God’s glory.
✞ Every time you think of a juniper tree, remember victory not despair.