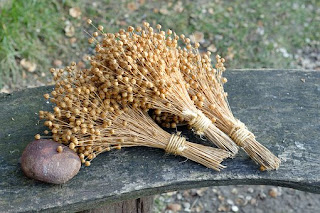 Key Verse: Verse 6 - "But she had brought them up to the roof of the house, and hid them with the stalks of flax, which she had laid in order upon the roof."

Key Words: and hid them with the stalks of flax

Flax is said to be rich in antioxidants. It also provides fiber, is believed to assist the body in fighting against cancer- in particular breast cancer, and tests have shown that flax has positive benefits in fighting against such things as Crohn’s Disease and colitis. Flax is also said to help heal the inner lining of an inflamed intestine.

But in our text it is very obvious that flax was used by Rahab to hide the two Israeli spies. Flax was used as protection.

Lorrie Anderson, missionary to the head-shrinking Candoshi Shapra Indians of Peru, was looking for a quiet place for her daily time of Bible reading and prayer, so she went down by the edge of the river. After reading her Bible, she took up her prayer list. Eyes closed, she did not see the deadly anaconda weaving through the water until it struck, burying its fangs into her flesh. It withdrew its fangs only to strike again. Then just as suddenly as it had struck, the deadly anaconda slithered off. While Lorrie was being treated, a witch doctor from a nearby village burst into the room where Lorrie was and stared at her. The witch doctor could not believe that Lorrie had survived the attack. It seems that the witch doctor had chanted to the spirit of the anaconda that morning and had sent the snake to kill the young missionary.

“I am certain,” Lorrie said, “that except for the protection of God, it would have worked.”

So the next time you hear or see or even eat some flax, think about the protection of God.

What to do:
✞ Let flax remind you of God’s protection.